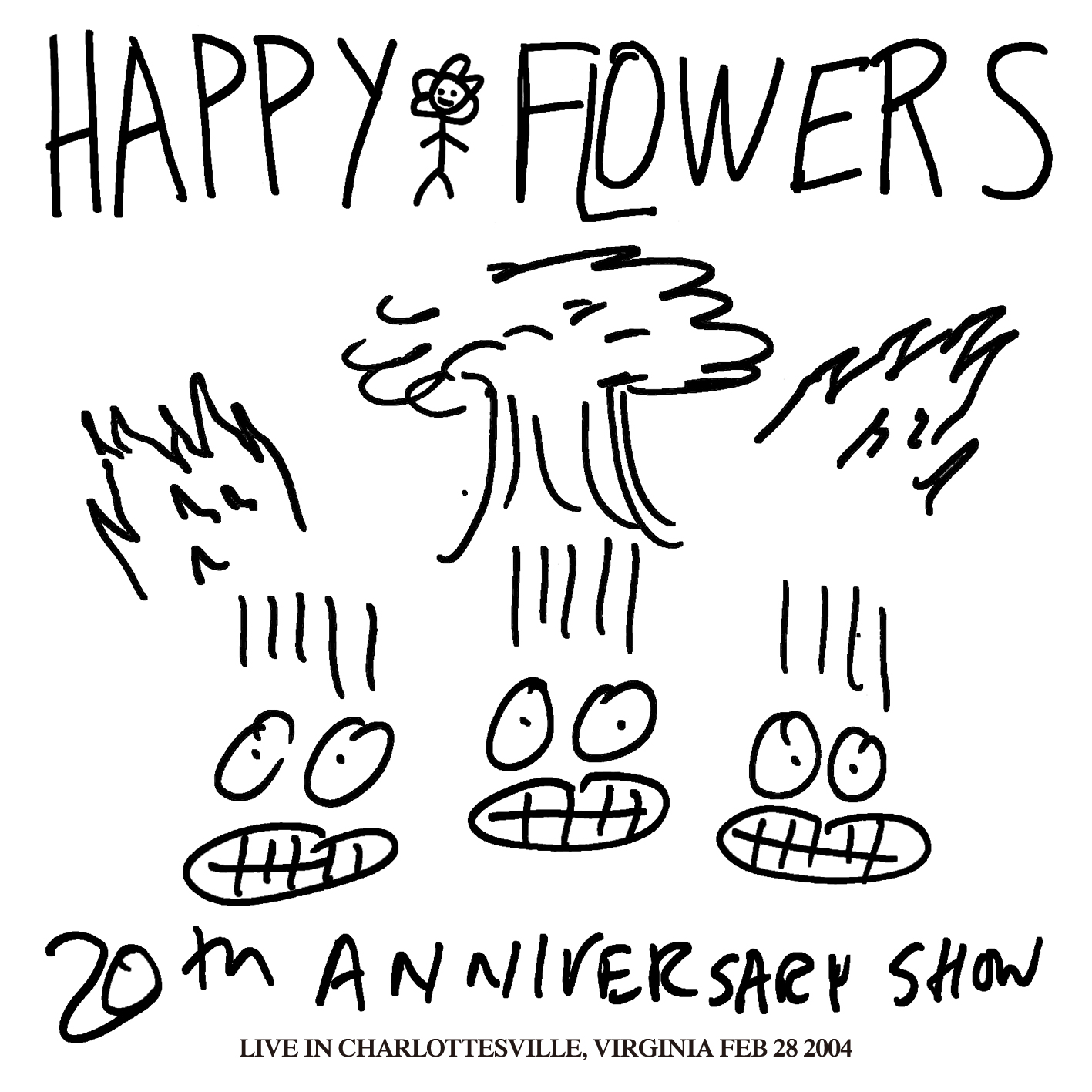 Live recordings of Charlottesville, VA duo, Happy Flowers' 20th Anniversary Show. Including many of their popular songs: "BB Gun", "Call Me Pudge", "Mom, I Gave the Cat Some Acid", "Mrs. Lennon", etc. All nearly perfect expressions of what they do. Just as smart, funny, and sinus-clearingly loud as all their others. As some rock & roll axiom or other goes, "If it's too loud, you're too old." In the case of Happy Flowers, that is true in the most deliciously twisted way. Guest drummer is Mike Malinin (Ex-Goo Goo Dolls). Happy Flowers:
Evoking the nightmare world of childhood trauma with insight, humor and surprising heart, the duo of ex-Landlords members Mr. Anus (guitarist Charlie Kramer) and Mr. Horribly-Charred-Infant (vocalist John Beers) teamed as the Happy Flowers in their native Charlottesville, Virginia in 1983. They debuted the following summer with a pair of EPs, Songs for Children and Now We Are Six (later collected as 1987's Making the Bunny Pay), establishing their singular aesthetic -- brutal, improvisational noise laced with wailing, infant-like vocals -- over the course of tracks like "Mom and Dad Like the Baby More Than Me," "I Wet the Bed Again," "Mom, I Gave the Cat Some Acid" and "All the Toys Hate Me."
With 1987's My Skin Covers My Body and the following year's I Crush Bozo, the Happy Flowers found a growing audience within the ranks of the U.S. hardcore community. With 1989's Oof, their music grew slightly more accessible -- scattered amongst the usual fare like "There's a Soft Spot on the Baby's Head" and "Charlie Said the F-word Again" were attempts at the blues ("Ain't Got Nothin'") and even a surprisingly melodic cover of Yoko Ono's "Mrs. Lennon." 1990's Lasterday I Was Bad was even more straightforward, with renditions of Big Star's "Thirteen" and UFO's "I Don't Want to Share" mixed in with the likes of "If This Gun Were Real (I Could Shoot You and Sleep in the Big Bed With Mommy)" and "I Shouldn't Have Eaten That Stuff."
(All Music Guide, by Jason Ankeny)